_ Music Theme from Story of O

" Marsaxlokk is a traditional fishing village  located in the south-eastern part of Malta, with a population of 3,277 people (NSO Report, Dec 2008). The village’s name comes from marsa, which means "port" and xlokk, which is the local name for south east. The word is related to the name for the dry sirocco wind that blows from the Sahara, comparable to the equivalent Catalan  word, "xaloc".

It was in the "bay of the sirocco" (Xlokk) that the first Phoenicians landed and set up trading posts on Malta, during the ninth century BC. During theGreat Siege of Malta , Marsaxlokk harbor was also used as an anchorage by the Turkish fleet.

Overlooking the northern arm of Marsaxlokk Bay is the hill of Tas-Silg , which contains remains of megalithic temples of the Tarxien phase, with later alterations resembling the Ħaġar Qim model. Bronze Age material has also been found scattered around the area. From the end of the 6th century BC to the 1st century AD, the hill was used as a religious site, notably as a temple dedicated to Astarte/ Hera . Marsaxlokk was part of Zejtun Citta Beland in the past years. The Tas-Silġ site was used again for religious purposes sometime in the 4th century AD, when it was adapted to a new religion, Christianity, and possibly used as a monastery.

In recent decades, the village has been the site for wet bulk operations. Malta's new main power station is here. Discharge of petroleum products takes place mainly at the Enemalta discharge installation point at Birzebbuga. Apart from this, Oil Tanking (Malta) Ltd. operates an independent oil terminal  at Marsaxlokk, which has discharge and loading points along the breakwater pier and offers storage, blending, and bunkering facilities.

New shipping trends and the introduction of large, specialised container vessels meant that, for Malta to take advantage of its position at the crossroads of numerous shipping routes, a new facility for container shipping had to be built. The Malta Freeport  Terminal, at Marsaxlokk, has developed into a major container terminal in the Mediterranean, equipped with the latest in technology and serving many of the giant operators in the container carrier sector.

The present-day population of Marsaxlokk is around 4,000. In the past, a great percentage of the population worked as full-time fishermen. The number of working fishermen has decreased, in part because people from other localities have moved to the village." 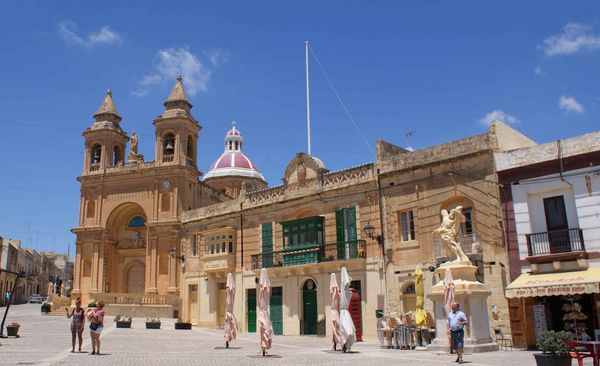